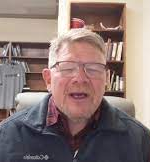 He graduated from Carson Newman University (1992) and the Southern Baptist Theological Seminary (2003). He occasionally serves as an adjunct professor in the School of Religion for Carson Newman.

He has been married to his high school sweetheart, Cecelia since 1984. They have three wonderful and beautiful daughters: Holli (1993), Lydia (1996), and Abigail (1999). In his free time, George enjoys playing golf, hiking in the Smoky Mountains, and watching football and baseball. He pulls for the Vols, Titans and Cubs!

His Life Verse is Habakkuk 3:18-19: “Yet I will rejoice in the Lord, I will joy in the God of my salvation. The Lord God is my strength; He will make my feet like deer’s feet, And He will make me walk on my high hills.”

Stiel Lovin joined the Grace Point Staff in January of 2020. He is a native of Hamblen County and is a graduate of Morristown West High School and Carson Newman College. He is also a 6th grade teacher at West View Middle School in Morristown. He and his fiance Andee Menees will be getting married in June of 2020.

Lydia Miller de Santos joined the staff of Grace Point in March of 2020. She is a native of Talbott and grew up in Grace Point. After being homeschooled, Lydia graduated from Berean Christian High School as an independent studies student. She also graduated from Walters State Community College with a degree in Spanish, and then was certified to Teach English as a Foreign Language (TEFL) through Maximo Nivel in Antigua, Guatemala. After receiving her certification, Lydia worked for Maximo as a teacher and then as a site coordinator for community service volunteers. Lydia lived in Guatemala for two and a half years. She married Brayan Santos, and they have a daughter, Sofia Grace, born April 8, 2019. Lydia and her family returned to Tennessee in October 2019 and she served for several months as the volunteer worship leader at Grace Point before being added to the staff.